In 1958, there were very few foreign restaurants in the United States, but many people from other countries interested in foods from foreign lands. With the help of my Moroccan-born grandmother and her Russian friend Tatiana Galitzine King, as well as a number of French, Hungarian, Argentinian, Italian, Dutch, and Iranian friends, the Cosmopolitan Club of Baltimore was born. The group hosted black tie dinners several times each year, usually prepared by the members themselves as many were excellent cooks, and the group was treated to a foreign repast prepared by a native of that country. The group was organized and they planned menus and locations for the year, collected dues, took reservations, and arranged for cooking and serving. Proceeds went to supporting the International Center of the YMCA. 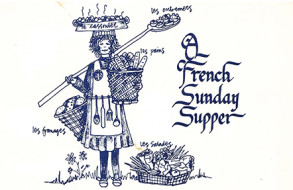 June 1992 – A Menu for Russian Princes, Princesses and Cosmopolitans

In 2007, my grandmother sent me instructions for starting my own Cosmopolitan Club in Denver. I am finally getting around to it. If you are interested in joining the club, please contact me directly at kristin@columbinekitchen.com.